This means the left and right sides of their bodies and wings can be divided into an almost exact mirror image of each other down the midline.

What the Ninjas Say:

Ninja 1 – Air flows really well around symmetrical birds. This allows them to fly well.
Ninja 2– Female birds prefer symmetrical mates. This means they are more likely to have symmetrical young.

What is the ‘Midline’?

The imaginary line drawn down the middle of the body to divide the left and right sides is sometimes called the midline. It is yet another name for the axis of symmetry and line of symmetry.

Why do Birds Have Bilateral Symmetry?

The first, and most obvious reason is so they can fly really well.  Thought Experiment One – Imagine the air flowing around a bird in flight with one wing bigger or smaller than the other. How would this effect the flight?   Thought Experiment Two – Imagine if one of the bird’s wings was a completely different shape to the other or if several feathers were missing from one wing. What would this do to the birds ability to fly? 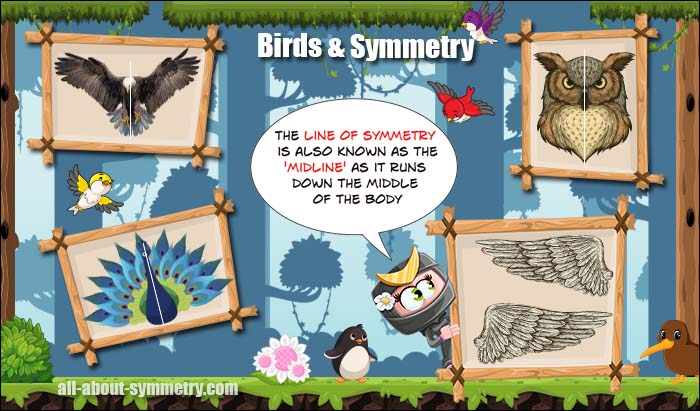 What is the Midline?

What the Ninja Says – The Line of Symmetry is also known as the ‘midline’ as it runs down the middle of the body.

The second, and not so obvious reason birds have bilateral symmetry is female birds loves symmetry in their mates!   Experiments have been carried out to show female birds prefer more symmetrical mates because symmetry is an indicator of ‘good genes’. Symmetry in birds is associated with speed, strength, ability to fight and protect the young.